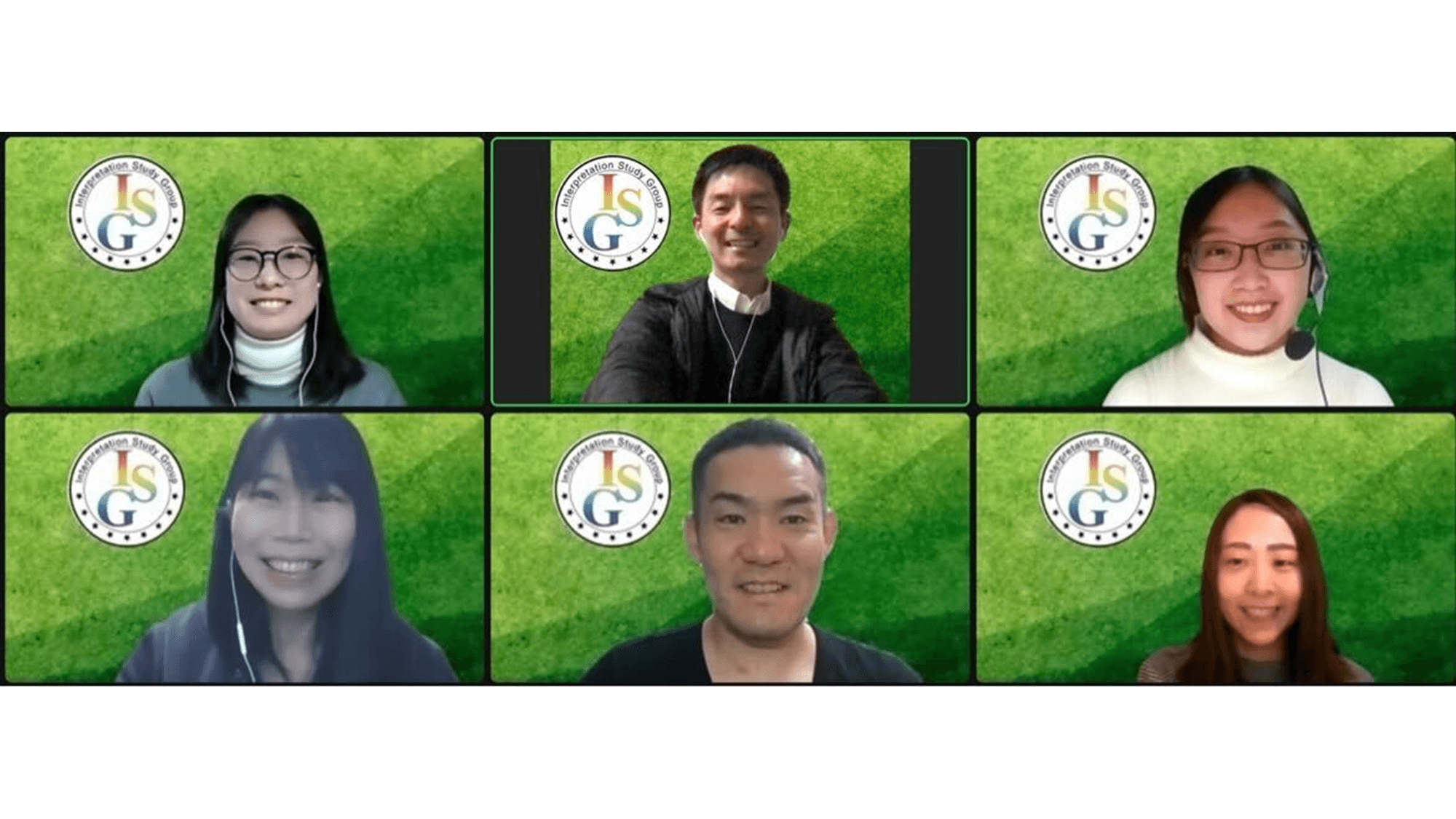 Japanese ver
(This article was translated in English by Kico Ueyama)

Green Innovator Academy (hereinafter referred to as GIA) was established in October 2021 to raise innovators who are willing to change the future for the better. Among various programs, guest speakers from overseas were invited in the first term, and international students joined in the second term. Therefore, “Simultaneous Interpretation” is indispensable for GIA.
We interviewed ISG Interpreters’ Team including Ryohei Onishi, who has fully supported GIA’s simultaneous interpretation.

– What brought you to do simultaneous interpretation at GIA?

– What was difficult in simultaneous interpretation? Tell us stories behind the scene.

Mr.Onishi: I have been an interpreter for 11 years, and I can tell the difficulty of GIA is outstanding. Especially, Mr. Naoto Kanehira from World Bank and Mr. Yudai Maeda, an energy analyst spoke particularly fast and condensed a lot of information. I still remember asking a staff member in a ZOOM chat to let them speak a little slowly as I was almost dying while interpreting.

M: I struggled to keep up with speakers’ intelligence through simultaneous interpretation. I realized that not only my interpreting skills but also my general and expert knowledge were insufficient. However, we tried our best to go beyond the limits of our ability as the students of GIA tackled challenging problems.

– Did anything change after doing interpretation at GIA?

Mr.Toyonaga: I am currently an in-house interpreter. The interpretation at GIA is astoundingly difficult, which made me think, “I’m interpreting at GIA, so this in-house conference is not a big deal!” This shows how much GIA has made me grow as an interpreter.

Ms.Hayano: I felt the passion of all the students, staff members, and the guest speakers of GIA. Above all, I am delighted to play a part in delivering the passion to international participants.

– Could you tell us about ISG?

Mr.Onishi: ISG stands for Interpretation Study Group. It was established in 2017, and many students have become in-house or freelance interpreters and translators. The lectures are held online in a small group, so both university students and businesspersons across Japan are learning interpretation on Zoom. The fee is about one-tenth compared with interpreting training schools, which is quite a reasonable price. In the future, I hope to develop ISG as an interpreting training institute comparable to major interpreting schools.

The important role of ISG is not only to provide interpretation services but also to create a career path for university students to be interpreters. Students with an interest in interpretation are shocked during job hunting to face the reality that no company hires interpreters as new graduates. Nothing has changed since 2010 when I was a new graduate.

By working with professional interpreters, students can learn things they would not normally see, such as preparations for interpretation, receiving meeting materials from GIA, reading them, creating Japanese and English terminology, doing audio checks for Zoom simultaneous interpretation, and switching interpreting turns. These are extremely meaningful in that students can put their vague idea of interpretation into shape and in building up their careers.

ISG provides interpretation services, but we would like to work with clients who can share our vision of developing interpreters of the next generation. For example, every time I get jobs of public interpretation or Zoom interpretation, I ask clients if I can get the audio file of my interpretation. This is because I can use the recordings for training interpreters. I make the same request to interpretation agencies, although it sometimes causes inconveniences to them. But clients who can take time to do this are increasing little by little, fortunately. As GIA has given us the interpretation audio, my students and I listen to it again in lessons to learn which points they struggled with translating, and where the problems lied, such as vocabulary, knowledge, or explosiveness. Then, we make interpretation practice menu depending on their weaknesses to make a better performance next time.

– If GIA asks you for interpretation in the third term, would you accept?

Mr.Onishi: Yes, of course! By that time I’ll have more students and interpreters who can make a debut at GIA. ISG is highly efficient in that interpreters who know each other work together, on the other hand, half of the interpreters including me have children and we are sometimes unable to work suddenly because of children’s fever and so on, which I think is a challenge. By preparing for spare interpreters, I would like to deal with interpretation jobs more sustainably. When ISG becomes more sustainable, I hope we can contribute in some small way to GIA’s goal to raise 1,000 green innovators by 2030.

Ryohei Onishi
Ryohei Onishi is the founder of ISG, a conference interpreter, and an interpretation educator. Studied interpreting and translation at Graduate School of Kobe City University of Foreign Studies (M.A.). He established ISG in 2017 to raise future interpreters. Speaker at TEXxKobe 2019, simulntaneous interpretater for Taiwan’s Digital Minister Audrey Tang in 2021; contract lecturer at Faculty of Global Communications of Doshisha University since 2022.
ISG: https://kcufsplus.com/club-activity/club-activity-social/club-activity-konin/isg-interpretation/
TEDxKobe “We Are All Interpreters”: https://www.youtube.com/watch?v=paoKicDcFAI

Ayana Hayano
Ayana Hayano completed Graduate school of interpretation/translation programs, Tokyo University of Foreign Studies. After engaging in the area of decarbonization of vessels and aircraft including COP relations at Classification Society, and Ministry of Land, Infrastructure, Transport and Tourism, she became an interpreter and translator. She worked at a beverage company and currently works as a freelance interpreter and translator.
LinkedIn:https://www.linkedin.com/in/ayana-hayano-nishino-9b5734153

China Inoue
China Inoue got a master’s degree in Interpreting and Translation Studies in the master’s program at Kobe City University of Foreign Studies and Monash University in Australia. Currently in charge of overseas sales at a cosmetic manufacturing company. She won the third prize at the 12th Annual Student Interpretation Contest.
https://www.kobe-cufs.ac.jp/news/2018/19883.html

Kiko Ueyama
Kiko Ueyama is a fourth-year student at the Department of English Studies, Kobe City University of Foreign Studies, and is going to study at Monash University in Australia from February 2023. She won the first prize at the 16th Annual Student Interpretation Contest.
https://www.chunichi.co.jp/article/590679